Setting up the firewall in the right (and safe) manner can be very complex. Someone with in-depth knowledge of firewalls should do this. If you do not have someone with this knowledge, make sure you you hire an expert to check or setup your firewall.

Please also be aware that you need more than a firewall to secure your PBX. You can read our roadmap to a safer PBX.

The PBX has an integrated firewall that helps you to limit access to the platform. We strongly advice to use this function, as it improves the security level of the platform and avoids fraudulent actions from unwanted parties.

Never use ‘Allow All’ 0.0.0.0/0 for all services in a production environment, as this will allow ALL traffic to access the server. This essentially disables your firewall.

Add or edit a firewall rule

Go to System/Firewall and click Add (or Edit to change an existing rule). 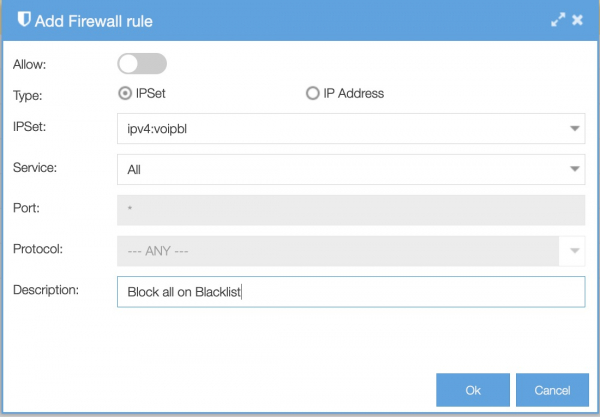 Click OK and use the ‘apply firewall’ button to write the table. To save it permanently you will need to apply the change and save the changes as well.

The subnet mask can be found using the following overview:

There are three things to keep in mind when using the pbx firewall:

The Axeos pbx firewall is statefull – instead of checking each and every network packet against our firewall rules, it only checks the first packet of any connection and accepts any packet belonging to connections that were already established. This way the firewall is capable of distinguishing packets that are allowed and packets not allowed.

SIP is running over UDP by default and UDP is connection-less, so a firewall flow is not an individual connection (TCP), but any traffic between two address-port pairs. SIP phones usually connect from their port 5060 to the PBX on port 5060. After the first two packets have exchanged, the flow will be established and will only expire after a long time.

The PBX remembers registered phones over reboot (so they are reachable immediately after the reboot) and sends ‘qualify’ (keep alive) packets periodically to the phones. As the PBX initiated communication, this is always accepted and starts an established flow.

We use cookies to ensure that we give you the best experience on our website. If you continue to use this site we will assume that you are happy with it. Please read more in our privacy statement (in Dutch) Privacy Statement. Ok